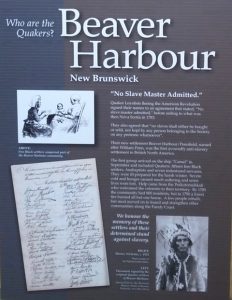 The past weekend at Beaver Harbour was indeed an extraordinary one. The event on Saturday, September 10, 2016 honouring the Loyalist Quakers who arrived in 1783, fleeing the aftermath of the American revolution was most informative and memorable. Deborah Coleman, who is president of the NB Branch of the United Loyalists Empire, gave the lead presentation, honouring the Quakers who established the town of Beaver Harbour and stated in the signing of the manifest that “no slave masters be admitted”. The Quakers faced rather extreme conditions the first winter, lost many of their cattle, but were grateful for the assistance of the Passmaquoddy who came to their aid. After building houses in a community that consisted of over 300 persons, the whole town was lost to fire just 9 years later. What a disappointment that must have been after so much work and care to build a meeting house and provide food and shelter for themselves. A lovely green area close to the Beaver Harbour Museum has two stones commemorating the founding Quakers. Ms Coleman would like for Quakers to support an application to designate the park as a national heritage site. Deborah is a direct descendant of one of those original Quakers, Benjamin Brown. 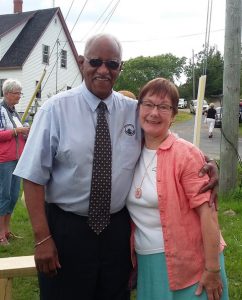 Jimmy Hawkins, founder of the Beaver Harbour Archives and Museum, along with his wife, Florence, was a part of the planning for this event. He gave us all a warm welcome and it was obvious to see how much work had been done to preserve the records his Mother had started to collect in the early part of the 20th century. He was also very keen to have the panels “Who Are the Quakers” made up for adding to the museum collection. He kept saying how pleased his Mother would have been to see what all had been done. His Mother was responsible for the erection of the first stone commemorating the Quaker Burial Ground. Carmen Eldridge donated the second stone which contained the “no slave masters admitted’ on the text.
Ralph Thomas was also a key person in organizing this event. He is president of Black History Society of NB and served as emcee for the event. He introduced the Quakers as part of the program, and when I asked them all to stand, they appeared to be about half of the crowd there! As the ones in the front row turned to see them all, their eyes were as big as saucers, and Ralph was so pleased to see the Quakers so well represented. There were 24 present! Ralph founded the Black History Society of NB in 2009 and has been working on learning about the history of African Americans in NB. He helped in the construction of a replica of the first house of an African American at Dunn’s Crossing near Saint John which now resides at Kings Landing.
Chief Hugh Akagi was also part of the event on Saturday afternoon and was presented with several plaques honouring his work. He joined us for a soup and sandwich supper at Grammies House and then joined with Marilyn Roper in presenting the significance of the archeological digs at Penns Ridge. He also gave us an update on the progress of the application for the recognition of the Passamaquoddies as a People.
We were pleased to have Maida Follini, clerk of Halifax MM with us, and Gordon Thompson, director of Canadian Friends Historical Association traveled from Toronto to be at this historic event. Friends from the PEI Allowed Meeting were also present and the clerk, Daphne Davey also had a supply of books about the first Quakers on PEI for Friends to obtain. Daphne looks forward to having the author, John Cousins, join us for a similar event on PEI for sometime next year. The clerk of Eastern Shore Friends Allowed Meeting, Judith Ann Camps was also an enthusiastic participant at this event.
At our meeting for business on Sunday, Vince Zelazny took over as clerk of NBMM. So he will be sending out future notices and information regarding NBMM.
An aftermath to this event – in conversation with Ralph Thomas, he asked if I knew of a brook called “Negro Brook” near Woodstock. He was interested to locate the brook and work to change the name. Upon returning home, I got out a map and found the small brook east of Woodstock. I knew a family who lived close by and sent them an email. Within the hour I had a phone call which said, “Oh yes, there was a black family that moved up from the south and built a house down there in the woods by the brook and that’s how it came to be named “Negro  Brook”. When I inquired about the date when they may have lived there, he said his ancestors came to this area around 1870 and this family had been here before that.When he went hunting he would sometimes run across kettles etc that he assumed had been part of that family settlement. I sent this information to Ralph and this morning he was on the phone and was so excited to receive this information. He plans to follow up. What are the possibilities that this family might have been one of the refugees who arrived as part of the loyalists. The work continues…….
In Friendship, Ellen 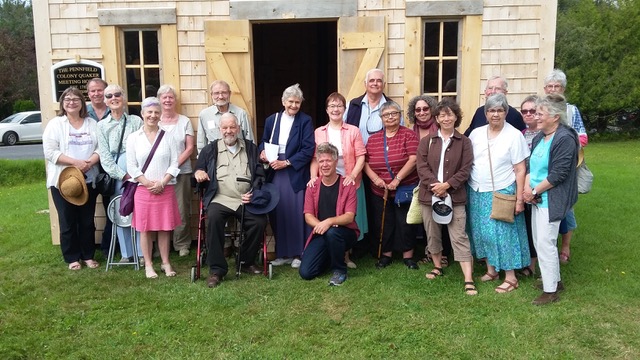 Next post: Clerk’s Statement on the Mosques Attacks in New Zealand