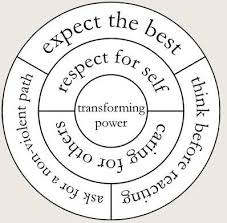 The Alternatives to Violence Project’s mission is to empower people to lead non-violent lives through co-operation, conflict resolution, community building, and respect for everyone, including respect for self. AVP is rooted in real life experiences. The workshops encourage people to develop their innate power to positively transform themselves and thereby change the world around them.

AVP is non-religious and non-sectarian in its presentation while freely borrowing from any tradition that expresses kindness, compassion, and non-violence. That said, AVP first arose in 1975 when the Quaker Project on Community Conflict assisted inmates at Green Haven State Prison in NY to run a workshop. Many of the current facilitators in the Maritimes are members or attenders of Quaker Meetings, in New Brunswick and Nova Scotia.

AVP Atlantic focuses its efforts on the Dorchester Institution. Facilitators run three or four workshops each year. There are three different levels of the program, with the Basic Level being offered the most often. The third level is Training for Facilitators, whereby participants who wish to become facilitators begin that journey. Each workshop has a team that includes both inside and outside facilitators.

AVP has operated in Dorchester since the 1990s. While the workshops are held in the prison, Corrections Services Canada neither runs nor participates in the program. AVP is entirely volunteer on the part of the inside and outside participants and facilitators. One inmate summed up his AVP experience as follows, “It’s good to be treated like a human being again.”